The La Rosière-Espace San Bernardo ski area (DSR) is continuing its efforts to preserve the area’s natural resources.
Throughout the year, it rolls out eco-responsible actions that fulfil the requirements both of its tourist activity and sustainable development.
Here are a few concrete examples of actions that have already been carried out in the resort or that are in the pipeline. 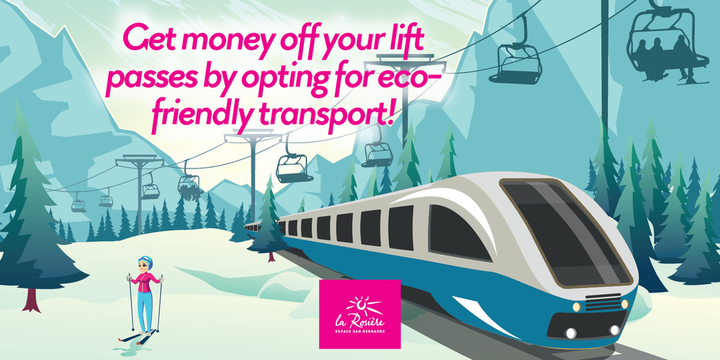 La Rosière is protecting the planet, and its visitors are reaping the benefits!

Holidaymakers travelling to their destination are the primary source of greenhouse gas emissions in ski resorts (57%)*. Yet another reason to travel by train, which is the only carbon-free mode of transport! The resort of La Rosière takes the ecological impact of its activity very seriously and is introducing special promotions to encourage visitors to choose more eco-friendly ways to travel. Any visitors who travel to Bourg Saint Maurice by train will be given a voucher for 15% off their next ESPACE SAN BERNARDO lift pass (valid for 2 days until 15 consecutive days).
*Source: Solving Efeso consultancy firm for the French National Association of Ski Resort Mayors.

See more details about this offer

In partnership with the French National Forestry Commission (ONF), one avalanche blasting point has been removed and replaced by snow fences.
400 trees (spruce and larch) have been planted.

The resort has also pledged to plant 1,500 trees over 3 years between 2021 and 2023. The shoots come from Bourg Saint Maurice (15km away) and this action is being carried out in partnership with the ONF for a total amount of €27,170 financed by the Domaine Skiable de La Rosière, the town hall of Montvalezan and the MND company.

Why plant trees?
Trees are our ecosystem's natural regulators. They purify the atmosphere by absorbing carbon dioxide and releasing oxygen. Their leaves and their roots filter water. They also act as soil stabilisers by preventing erosion and are home to a variety of flora and fauna.
Trees also have a role to play in regulating extreme differences in temperature by releasing water vapour into the atmosphere. This phenomenon influences the local humidity levels and tempers extreme climate fluctuations.

A map of the tracks that the DSR's 4x4 vehicles can use has been drawn up and is reviewed every year. These vehicles may only be driven on the designated tracks, to avoid damaging healthy land.

Litter picking on the ski area

Once a year, at the end of June, we spend half a day picking up litter on the ski area. This day is open to any volunteers who want to help the DSR staff to tidy up and preserve the mountainside. Every year, we collect between 400 and 500kg of rubbish.

All of the DSR’s buildings (offices, ski lift cabins, ski patrol stations, staff dining areas) have been equipped with a recycling bin and a waste bin.
We remind our staff about the importance of recycling at the start of every season.

The commune’s grass clippings are collected and scattered over the ski area. This is a natural, recycled soil-enricher. 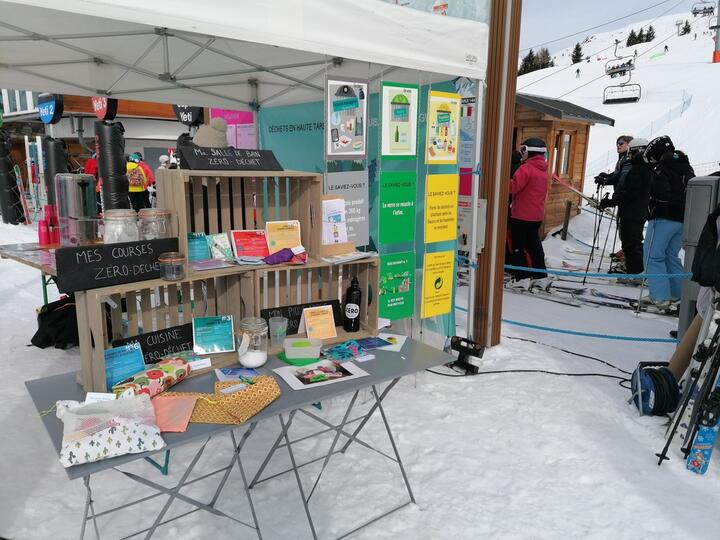 In winter 2019-20, we organised two themed days dedicated to the environment and set up stands to raise awareness at the bottom of the slopes in La Rosière.
These stands enabled visitors to find out how the ski area addresses environmental issues and to tell us what they think about the actions we are rolling out to protect the environment. The Community of Commune’s sent activity leaders to inform visitors about how waste is sorted in the Haute-Tarentaise. They also ran a Make your own lip balm workshop.

The Mountain Riders association was also on hand to raise awareness about global warming and the rubbish collected on the ski area once the snow has melted. They presented a waste disposal bicycle that crushes the plastic bottles collected during the ski area’s litter-picking day.

We also sort waste in the DSR’s garage.
Old batteries, oil, aerosols, containers and other materials are stored in special containers and are then taken to Montvalezan’s waste management facility.
Any scrap iron or aluminium is sent off to be recycled.
In 2019, 10,820kg of scrap iron and 760kg of aluminium was recycled!

The slope groomers’ hydraulic hoses are changed regularly to ensure they do not break off in the middle of the slopes.
We use MEWA cloths which are washed by a specialist company and can then be reused. This means we use fewer single-use cloths.

As for the ski lifts, the DSR strives to protect the environment by adopting eco-responsible habits.
During busy periods, the machines (chairlifts, drag lifts, etc.) work at full speed. However, when the slopes are quieter, the technicians slow the lifts down.
This uses less energy while still ensuring the same flow of people on the ski area. Any double ski lifts are reduced to one lane when there are fewer people on the slopes.


With regard to slope grooming, the drivers are taught how to drive their machines in an eco-friendly way.
Every machine is fitted with a GPS system to show them where they need to groom. This way they avoid grooming the same spot several times by mistake! 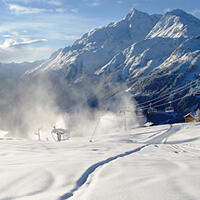 Making good use of the snowmaking system

The Espace San Bernardo, on La Thuile's side, was the first ski area in the world to exploit its snowmaking system to produce, in addition to its primary function, clean and renewable energy by setting up an innovative hydroelectric programme in 2015.
In 3 years, La Thuile's ski area has produced more than 4.8 million kWh (4.8 GWh) using only the force of the water circulating in its snowmaking system. This technical feat once again shows that ski area operators and the sector's companies are constantly investing and innovating in a bid to protect the mountains in which they live and work all year round.

You, too, can help us to be more eco-responsible!

Wondering where the money from your lift passes goes?

What is BIOM and what do they do ?

Independent French rating agency Biom Attitude audited the Domaine Skiable de La Rosière (DSR) in Winter 2017-18 to evaluate the company’s economic performance from a societal point of view, by cross-referencing its financial data with the main public reference documents for sustainable development.  At the end of the audit, the agency confirmed that the Domaine Skiable de La Rosière is rolling out actions that promote sustainable development among its stakeholders.

The results of the audit

The main indicator is the “% BIOM”: This is the percentage of turnover reinvested in sustainable development: economy + social + environment.
La Rosière was rated EXCELLENT, with 69% of its turnover redistributed to employment, stakeholders (mainly local) and the environment.

In brief:
When the Domaine Skiable de La Rosière delivers a service that is worth €1,000 (excluding VAT), it provides a social and environmental service worth €690 (excluding VAT).